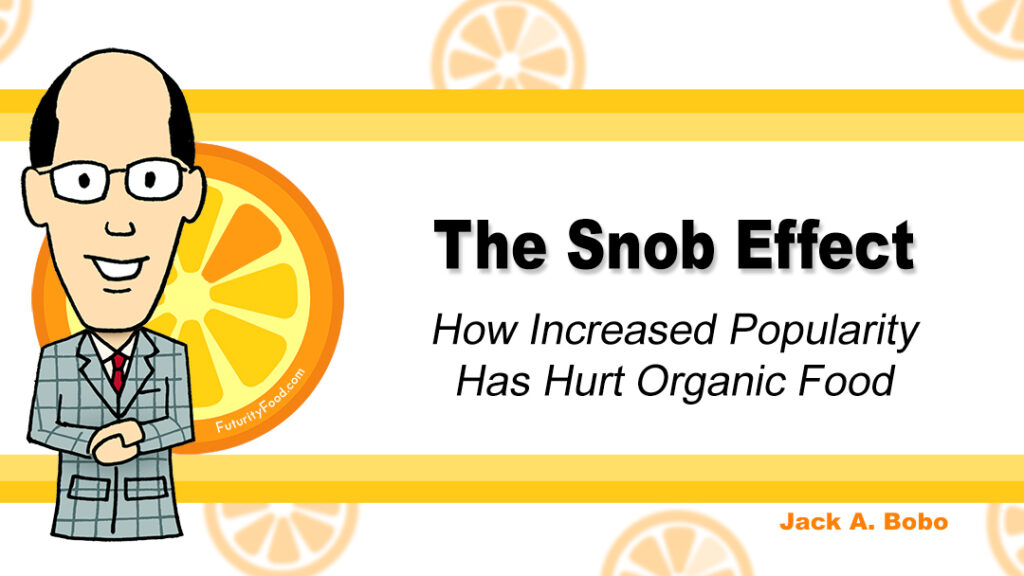 If you like good bourbon, you’ve probably heard of people trying to get their hands on a bottle of the notoriously rare Pappy Van Winkle, produced by the Old Rip Van Winkle Distillery in Franklin County, Kentucky. A few years ago, a friend of mine mentioned he was trying to find a bottle as a gift for one of his clients. While the retail price of Pappy Van Winkle’s Family Reserve Bourbon 15-year-old is about $120, he expected to pay closer to $700. But there were no bottles available, even at the higher price. Fortunately for my friend, I grew up in Southern Indiana and still had family there. I called my brother and he called a friend who had a private stash and was willing to part with a bottle at the retail price. Everybody ended up happy. We live in an age of conspicuous production, where the story behind a product is as important as the product itself.

When a product sells in the aftermarket for six times the retail price, a company might be tempted to increase production. But Old Rip Van Winkle Distillery understands the appeal of scarcity, and knows that increasing supply could kill demand for its product.

There are complex consumer perception issues at work here. The same kinds of factors are playing out in a big way in the world of organic food.

For decades, organic food sales mostly grew at a double-digit pace, until it has reached nearly $50 billion, or about 5% of total U.S. food sales, according to the Organic Trade Association (OTA). Organic food is becoming much more affordable and more accessible. Organic’s transition from niche to mainstream status was perhaps best exemplified by Amazon’s acquisition of Whole Foods in 2017.

One of the first things Amazon CEO Jeff Bezos did when the deal closed was slash prices on a range of organic goods. Fans of organic food celebrated, but the industry has not been quite so thrilled.

By “democratizing” organic food, Amazon’s move effectively turned it from a special niche item into a commodity. That shift in consumer perception has had a major effect on sales: The rate of growth in organic food sales has dropped to less than 10% during the last few years, hitting just 5.9% in 2018, according the OTA. Rabobank senior analyst Roland Fumasi says, “Organic produce availability has now become mainstream, which means that the organic produce market will continue to more closely resemble the traditionally-grown produce market.” 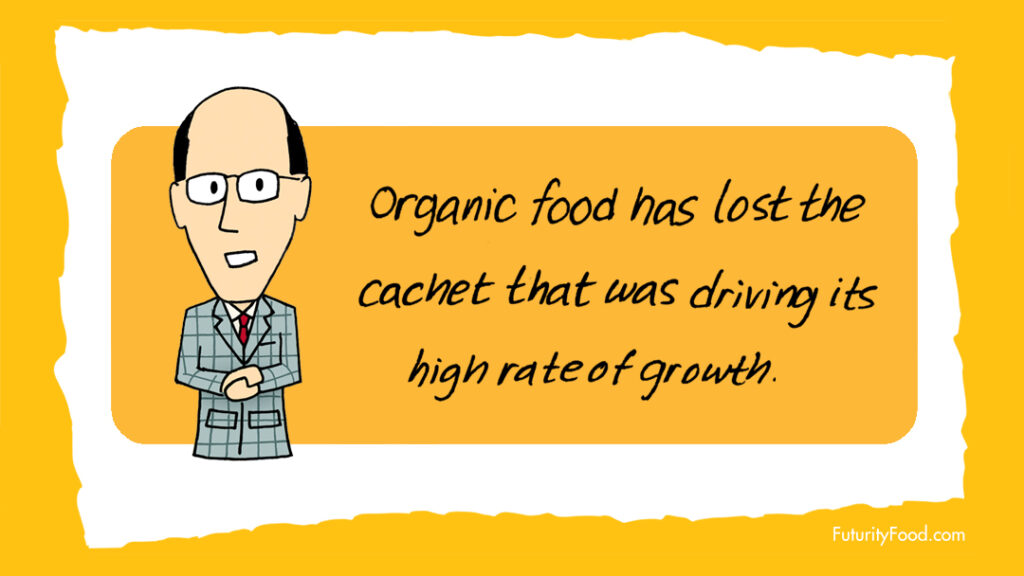 Once a mark of distinction, organic food is now generic and widespread. This is a testament to the past success of organic food producers and marketers, but it also changes how consumers think about organic. The concept of bringing organic food to the masses may have been conceived by people like Alice Waters in Chez Panisse, but it was brought to fruition in the aisles of Walmart.

Cachet Appeal is the “Snob Effect”

So why is it that just at the moment that organic food has achieved universal awareness and overcome the barrier of cost that had relegated the products to stores like Whole Foods that growth has slowed rather than soared? Psychologists describe situations in which consumer desire for a product diminishes as its availability increases as the “snob effect.” The more other people have a product, the less interested new people are in buying it. This is especially true for wealthy individuals, who tend to drop a brand if it goes too mainstream. 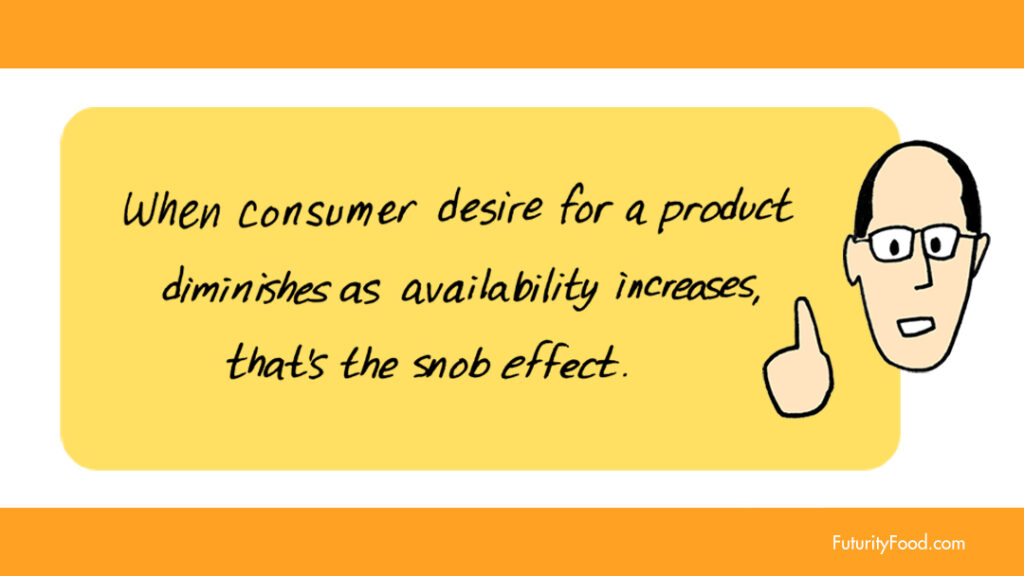 What does this mean for other trends? Plant-based foods have seen remarkable growth over the last year. The Economist correspondent John Parker declared 2019 was the “Year of the Vegan”. A report by UBS bank last year noted, “This has been a breakout year for plant-based meats, with the market growing to just under USD 5 billion in 2018. The UBS Chief Investment Officer believes this is just the start. With a 28% compounded annual growth rate, the plant-based meat market should grow to USD 85 billion by 2030.”

Production constraints for Impossible Foods and Beyond Meat limited expansion in the past, but new facilities appear to have addressed some of the capacity issues. Today both companies are rapidly signing up new restaurants to distribute their products. Other companies such as Tyson Foods have taken note and are diligently working on competing products. The number of plant-based burger companies is poised to take off. By the end of 2020 we can expect hundreds, if not thousands, of new plant-based products on grocery store shelves. As “plant-based” becomes the fashionable thing to say, we can expect products that have long been made from plants to start adding the “plant-based” label to their products. Peanut butter? That’s plant-based. Canned beans? Plant-based. Broccoli? Yep, that’s plant-based too. 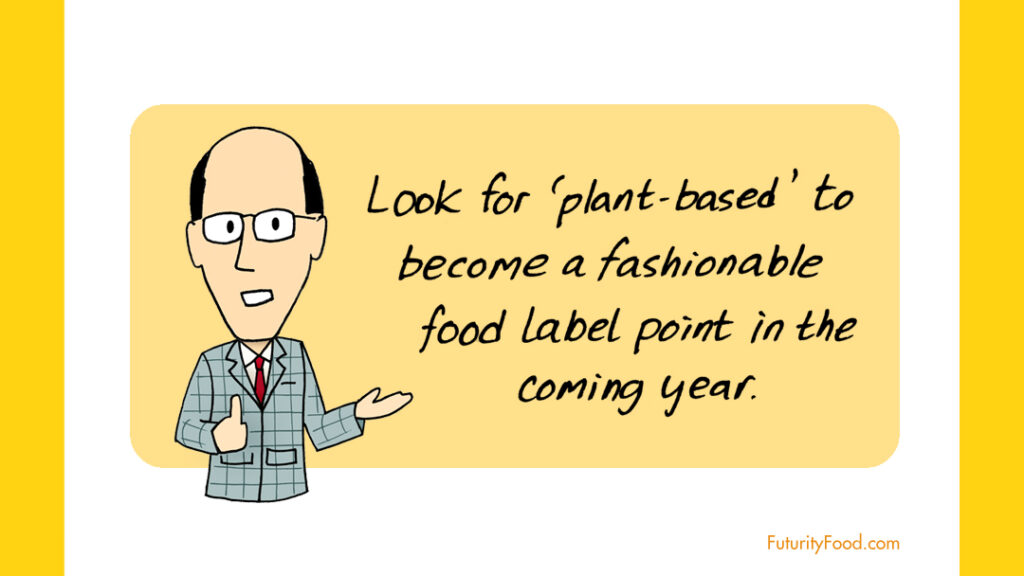 Challenges Ahead For Plant-Based

The biggest threat to the growth of plant-based foods is not competition from beef, pork and chicken, but competition for shelf space and the consumer’s attention. Does anybody truly believe there is a market on store shelves for almost a dozen different plant-burgers? By the end of 2020 many producers of plant-based protein products will need to be highlighting price, taste and convenience if they want to break through the noise and win the consumer’s attention. With price competition comes commoditization, and with that the snob effect is apt to kick in. Some of the current appeal of plant-based foods is probably due to its cachet, and as that fades it will likely slow the growth predicted by UBS. We can expect some product casualties as this plays out, but it probably won’t be the livestock producers for the time being.

The Snob Effect Is Not About Quality

Once you understand the snob effect, you begin to see its influence everywhere. Luxury brands carefully manage their production for this reason. The opportunity to sell a little more product is not worth damage that would be done to the brand’s prestige in the long term. An important point to remember is that the snob effect is not about the quality of a product, but about the social feedback a consumer gets from use of that product. This factor plays into many lifestyle issues involving the products we buy, but food decisions are too important to be made for superficial reasons. Ignore the snob effect and your palate will benefit. Instead of getting annoyed when your favorite artisanal cheese becomes popular and available everywhere, enjoy the chance to eat more of it at reasonable prices. Last year’s trends are this year’s bargains. Don’t resent them. Enjoy them. 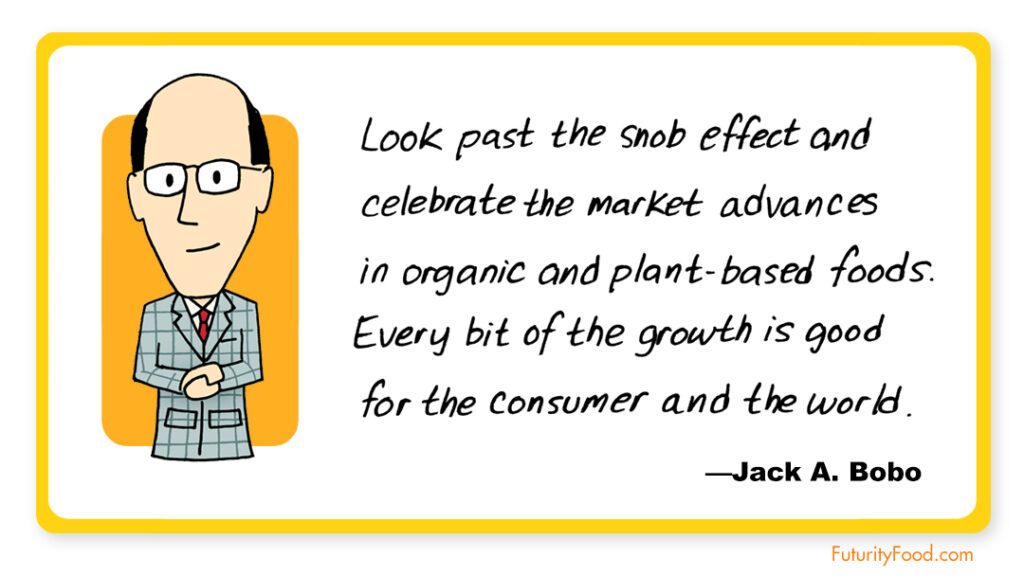