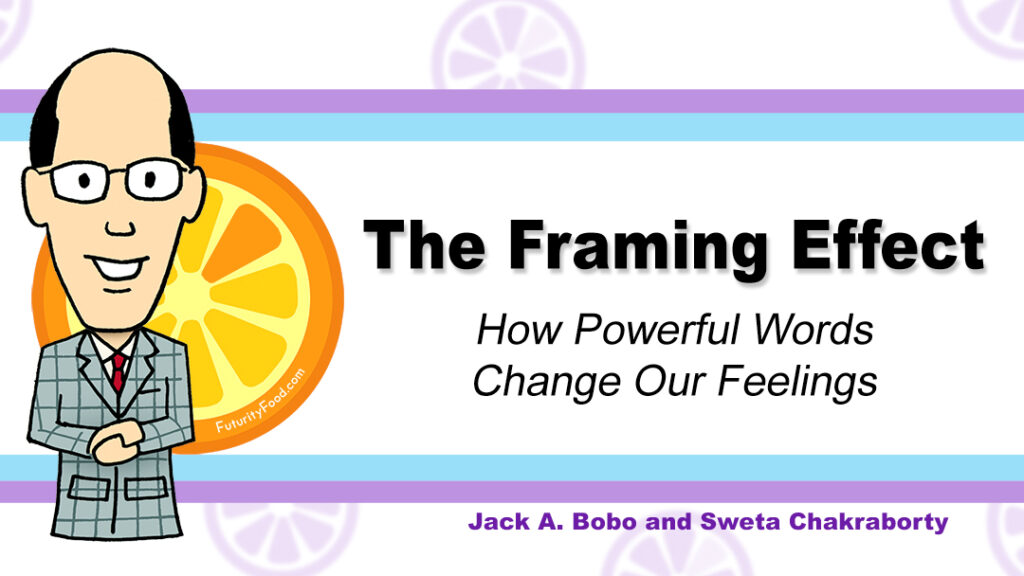 In March 2012, Bettina Siegel, a mother and food blogger in Houston, Texas sounded an alarm about scary-sounding meat products being served to local schoolchildren. She objected to the use of “lean finely textured beef” (LFTB)—a type of ground beef made from trimmings—in school lunches.[1] She launched an online petition in which she referred to the beef as “pink slime.”

Siegel promoted the petition through her “Lunch Tray” blog, asking the U.S. Department of Agriculture to have the “pink slime” banned from school lunches. Social media helped to amplify public concern and opposition to the LFTB. Siegel’s local campaign went viral, gaining more than 225,000 signatures in three weeks. The story was picked up by mainstream media, which took it national, then global.[2]

The narrative that emerged, and drew outrage among the public, was one of low-quality food being served to vulnerable children. The “frames” that defined the conversation were quality and health. Within a month, many companies announced that they would no longer use the filler product in their foods.[3]

But It Wasn’t Really A Terror

The truth is LFTB was not actually an unhealthy food. Using it reduced costs and prevented food waste. Why did consumers react with such outrage about this form of beef?

The relentless pursuit of efficiency by food manufacturers has greatly reduced waste from all steps of food processing, but it has not always been appreciated by consumers. Public outrage was unsurprising at the discovery that food companies were feeding consumers food that had previously been thought of as a waste product. Let’s face it. Nobody likes to eat trash. And yet, consumers overwhelmingly report a desire to reduce food waste and enhance the sustainability of the food they eat. And they expect companies to do more to deliver these benefits. The problem comes when people don’t want to change their eating habits to support such progress.

The Magnitude of Food Waste

According to the United Nations’ Food and Agriculture Organization, “roughly one-third of food produced for human consumption is lost or wasted globally, which amounts to about 1.3 billion tons per year.”[4] With global population surpassing 7 billion—on its way to a projected 9+ billion by 2050—everyone needs to use the resources available more efficiently. That includes minimizing food waste as much as possible.

Food waste occurs at many points along the supply chain: during harvest, storage or transportation before reaching the grocery store, at the grocery store and after the food reaches the consumer. In developing countries food waste and losses occur mainly at early stages of the food value chain and can be traced back to financial, managerial, and technical constraints in harvesting techniques as well as storage and cooling facilities.[5] Food waste in the developed world occurs mostly when consumers throw away food that has passed the expiration date—even though it is usually perfectly safe to eat. This would rarely occur in the developing world where food is much too precious.

An important lesson in the story of pink slime is that how we talk about food matters. Words are powerful, and they can easily evoke emotions and transform public opinion when it comes to the sensitive matter of food. We discuss the effects of the sometimes misleading term “natural food” in another post here.[7] Characterizing LFTB as waste got it demonized. By focusing the conversation about food waste on sustainability, public attitudes towards food scraps can be modified. In fact, one restaurant was able to convince diners to pay big money for the privilege of eating scraps saved from the rubbish bin. In March 2015, Dan Barber, co-owner and executive chef of Blue Hill and Blue Hill at Stone Barns restaurants, started the pop-up restaurant “wastED” inside Blue Hill’s New York City location. The pop-up restaurant exclusively cooked with “food waste.”[8] Barber’s effort was lauded in articles across the internet for raising the profile, and the bar, on food waste.[9] Nobody seemed to mind they were eating what had previously been considered trash.

The positive response to Barber’s project contrasted starkly with the narrative of pink slime back in 2012. The journalist Nara Shin identified the difference in her article Fine Dining with Food Scraps, saying “WastED is a fine dining experience where taste buds are rewarded with every dish and culinary creativity is showcased. [Barber is] tasking guests with being part of a cultural shift by reframing their own perceptions of waste.”[10] 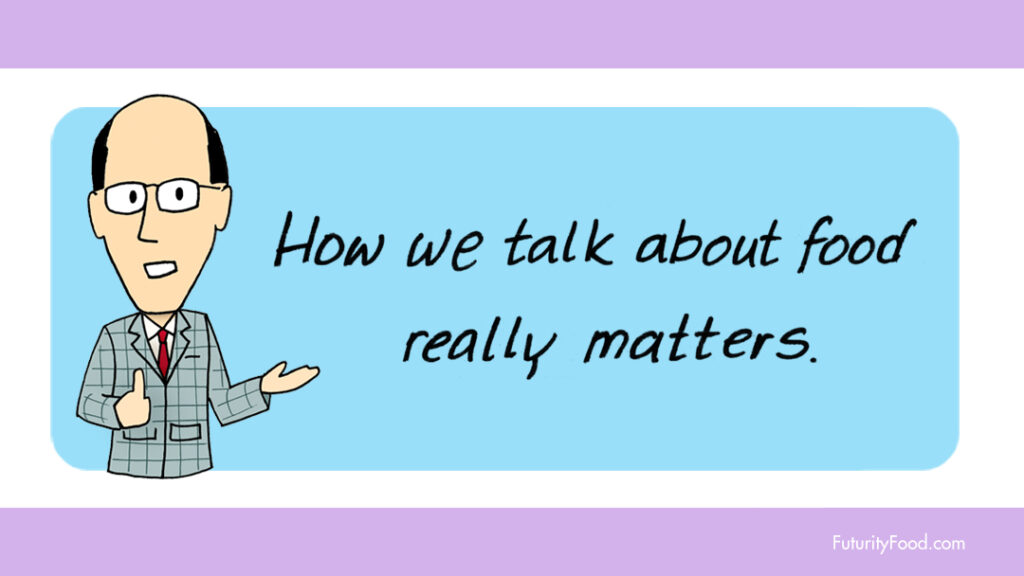 It All Depends On The Framing Effect

The frame used to talk about an issue or a product exerts a subtle but significant influence on our behavior, usually without our knowledge. The framing effect, as it’s called, is a mental shortcut, or cognitive bias, people use when options are presented in a positive or negative light. The framing as positive or negative affects perception or judgments.[11] Positive framing of products can increase the level of support for, or desirability of, products and vice versa. We are all familiar with the concept of the glass being half-empty or half-full. On one level we know that a glass that is half-empty is also half-full. The phrases may mean the same thing. But, at a subconscious level the two phrases convey significantly different emotions, which can influence our thoughts, our feelings, and our behavior.

In a famous study conducted by Amos Tversky and Daniel Kahneman, the pioneers of cognitive psychology, participants in an experiment were asked to pick one of two hypothetical treatments for a fatal disease infecting 600 people. Participants read statements like those below and then selected which treatment option they preferred.

Which option would you pick?

If you’re like 72 percent of the people in the original study, you picked option one. Surprisingly, when option one was reframed as 400 people dying (instead of saving 200), only 22 percent of participants were willing to choose that treatment option. Both framings presented participants with the same information—200 people would live and 400 die either way. The odds didn’t change, but the framing did, and it had a dramatic impact on participant perception and willingness to support the treatment. The positive frame won by a heavy margin.

The influence of framing can be seen everywhere in food marketing. Consider the following examples of how two insect protein food companies have framed their products.

Grillo owns the nature of the “secret sauce” in its Cricket Energy Bar by proudly placing the word “cricket” front and center on the label. Unfortunately for them, most consumers in the United States have an aversion to eating insects, due to what is commonly referred to as the “yuck factor.” The company attempts to overcome the negative frame resulting from the emphasis on insects as the key ingredient in the food, by highlighting the benefits, or positive attributes, of the product, including positive or healthy-sounding words like energy, organic, chocolate mint, nutrient dense, gluten free, dairy free, paleo and future food.

By contrast, Jungle Bar frames its similar food as an energy bar, a description which has positive associations for most people. The packaging further appeals to our desire for natural foods with simple ingredients. The company doesn’t attempt to hide the source of the protein. The phrase “insect powered” is right there front-of-package. But its placement suggests that it is not vital information, more of an afterthought or a footnote than a bold claim about the contents of the bar. So we don’t end up thinking about crickets when we look at this package.

Which one would you rather eat? For most Americans the choice is clear.

Producers of plant-based foods are well aware of the importance of framing as well and use the concept to good effect in their marketing. Just Foods, manufacturer of Just Egg, which uses mung beans as the key ingredient in its egg-like product, takes an approach similar to Jungle Bar. Rather than try to convince consumers to eat mung bean breakfast sandwiches they frame the product as a plant-based egg substitute. Apparently, consumers agree that describing the product as eggs “made from plants” is more appetizing than “mung bean patties.”

Impossible Foods likewise markets its plant-based Impossible Burger without specific reference to just what plants go into its construction.

Future Food Options Will Depend On Good Framing

When we consider the terrible magnitude of food waste, in a world where millions of people go to bed hungry every night, we can see that it is going to be increasingly important to frame new alternative food sources in ways that allow consumers to appreciate their benefits rather than recoil from their unconventionality. Negative framing can consign millions of pounds of usable food to the trash bins every day, or allow promising products to languish unproduced because they happen to sound unpalatable to current mainstream sensibilities. Tactics like making the reduction of food waste a prominently discussed public virtue, or championing the positive impact of an alternative food source could counter negative framing. We have seen in the WastED experiment that clever positive framing can change public opinion completely, and make people desire food products one day that they would have thrown out in disgust the day before. 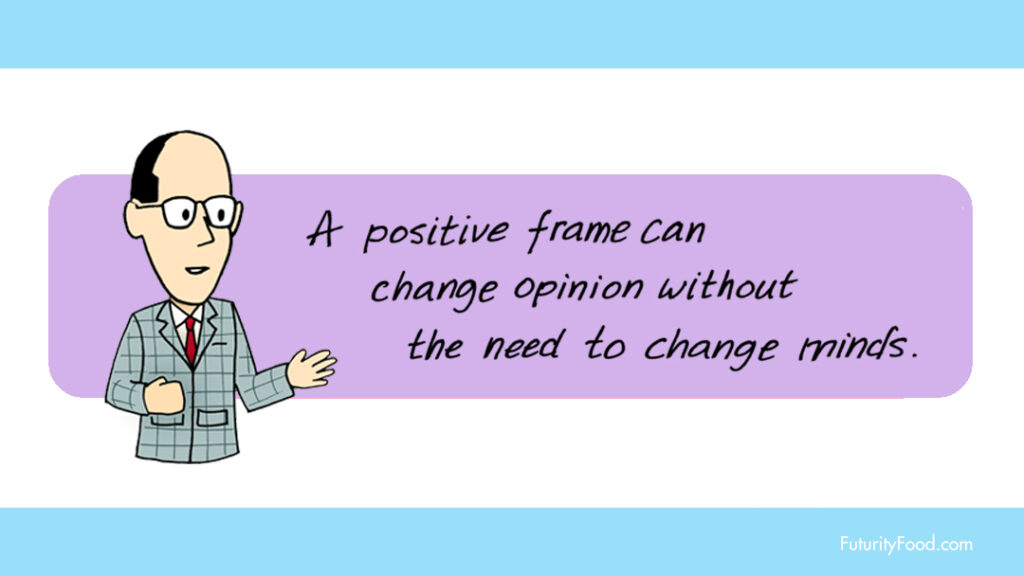 Agricultural engineers and food development researchers are making exciting advances around the globe today, just as food production companies and entrepreneurs are finding innovative new ways to reduce and eliminate food waste at different points in the production chain. The examples cited here illustrate that there are great possibilities ahead—but the spectacle of Pink Slime reminds us that the role of creative communication and control of the framing effect will be vital if we are to make the most of our potential to feed the burgeoning world. 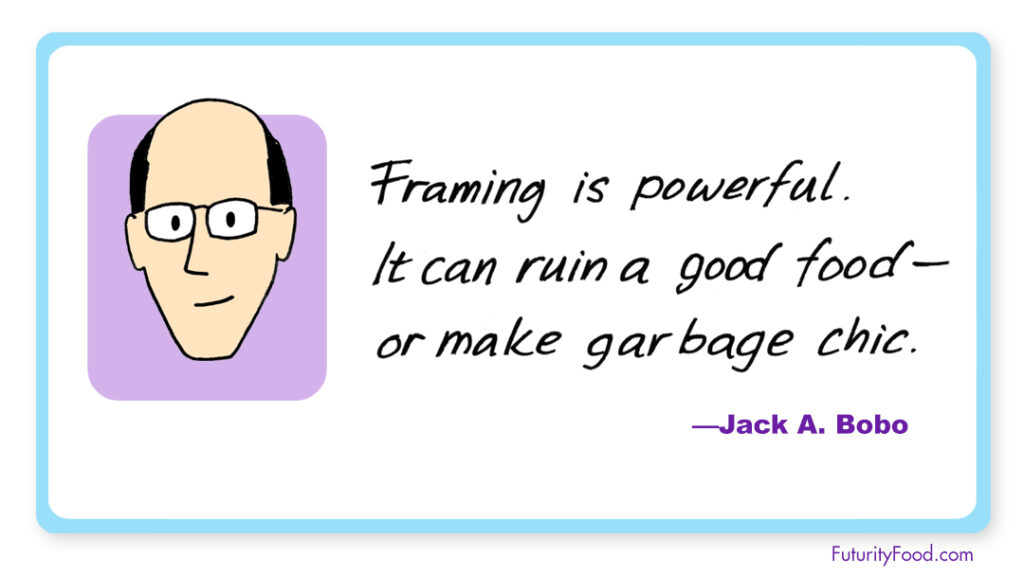