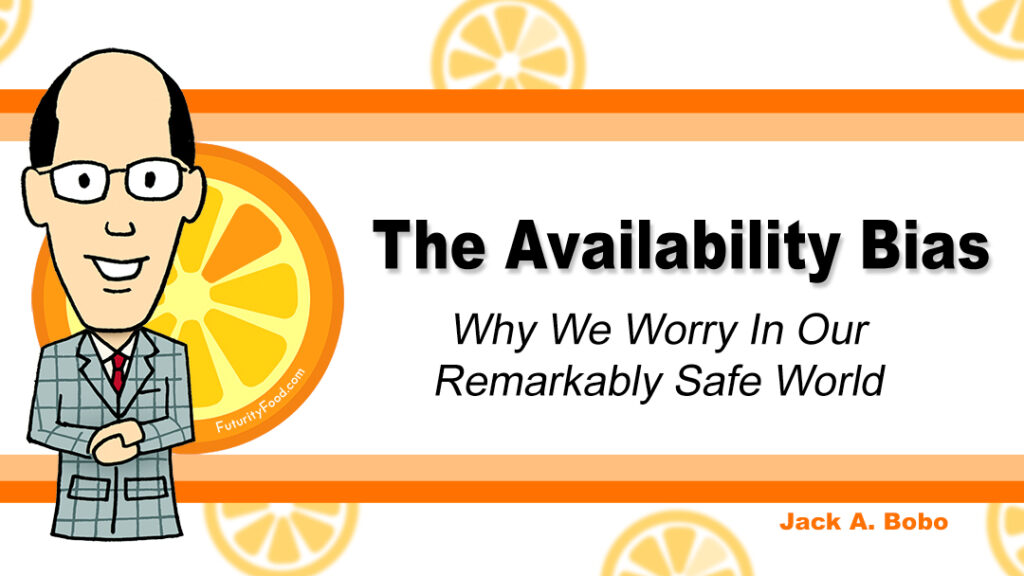 We Live In The Age Of Anxiety

The world can seem like a scary and dangerous place these days. If you spend too much time on the internet, or listening to the news, you might not even want to leave your house at all. According to these sources, there are dangers like air pollution, gun violence, food preservatives, and a hundred other evils lurking around every corner. Our media makes certain that in modern life we worry a lot about a lot of different things.

But The Facts Are Not So Bad

The Swedish statistician Hans Rosling wrote a book called Factfulness with the goal of helping people better understand how to make sense of the daily deluge of information. He felt that with better understanding of the facts, we could all be more hopeful about the future. As a statistician Rosling spent a lot of time analyzing data about the world around us, and he shared his insights through a number of TED Talks. You can watch an amazing 5-minute talk here where Rosling’s discussion spans 200 countries over the course of 200 years. The positivity in this talk will blow your mind. The trend towards healthier and wealthier citizens is true from Lagos to Bangkok and everywhere in between.

A Great Many Trends Are Positive

A sampling of charts from Rosling’s book highlight some of these positive trends, such as the increases in literacy, democratic government, parkland acreage, and food production. 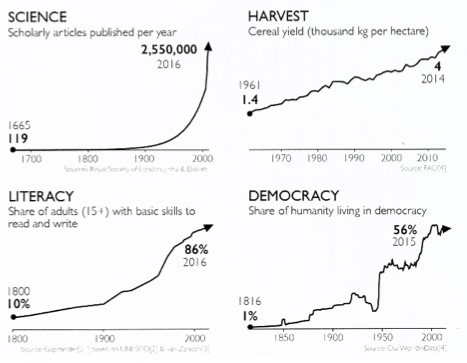 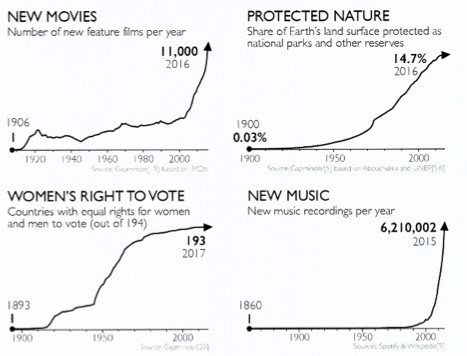 It’s Getting Better All The Time: Graphing World Trends, by Hans Rosling 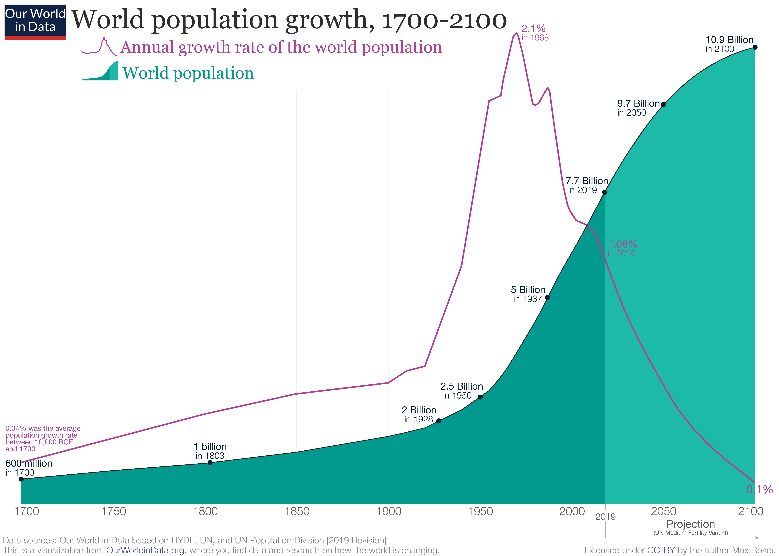 Closer examination reveals that even trends like population growth that are widely considered catastrophic are not as bad most people think. For example, if you had to guess the year when the rate of population growth was the fastest, what might you choose if your options were 1968, 1992 and 2016?

The answer is 1968, just two years after I was born. Since then the rate of growth has slowed dramatically, and the number of people born each year has pretty much leveled off. The dramatic growth seen in the accompanying chart is not from a high rate of increase, it’s because people are living longer. This is a good news story. By the end of the 21st century the global population will likely begin to decline.

So Why Do We Worry So Much?

If the world is so much better a place today than 100 years ago, or even 50 years ago, by most measures, why is it that many people, maybe even most people, feel like things are so much worse? The answer to that question is something called availability bias, and to illustrate it let’s consider food safety.

Food safety scandals are nothing new. The Food and Drug Administration was created more than 100 years ago because of a need to confront real and significant dangers to our food supply. Scandals like those of the 19th century, such as the swill milk affair of 1850, are rare today, but they cast a longer shadow than ever before. When they do occur, their impact is felt long after the products have been recalled and the perpetrators punished. Why is this?

Our brains don’t let go of negative stories easily. They hang out in the forefront of our consciousness where our mind can easily access them. This causes old information to color our views and assessments of new situations.

For example, if we read online about an outbreak of a foodborne disease, our brain will go in search of previous examples, and it will latch on to those easiest to recall in order to assess the danger. The bigger an impact an old story had on us, the easier it will be to recall. That usually means the scariest, deadliest, most compelling story… which may or may not be the most relevant.

The more we hear about a story, the easier it is to recall. This is sometimes referred to as “social amplification.” In order to save mental “processor time,” our brain tends to make judgments about a new story based on its similarity or connection to old news; it is apt to take this shortcut rather than go through the labor of fully processing the new information.

This is an example of a heuristic that researchers Amos Tversky and Daniel Kahneman (1974, p1127) described as the “availability bias.” The availability bias describes how consumers assess the probability of an event by the ease with which occurrences can be brought to mind. This is one of the reasons we worry more about plane crashes than car crashes even though we may realize that car crashes are far more common and kill more people. Plane crashes are vastly less likely to occur to any of us but they are memorable precisely because they are rare and usually horrific in terms of lives lost. The easy availability of that memory makes that event seem more likely to happen again, or happen to us, even when it is extremely unlikely. That is the availability bias at work, and it can seriously skew our perception of the world around us, especially in an age where negative news events get maximum social amplification online. 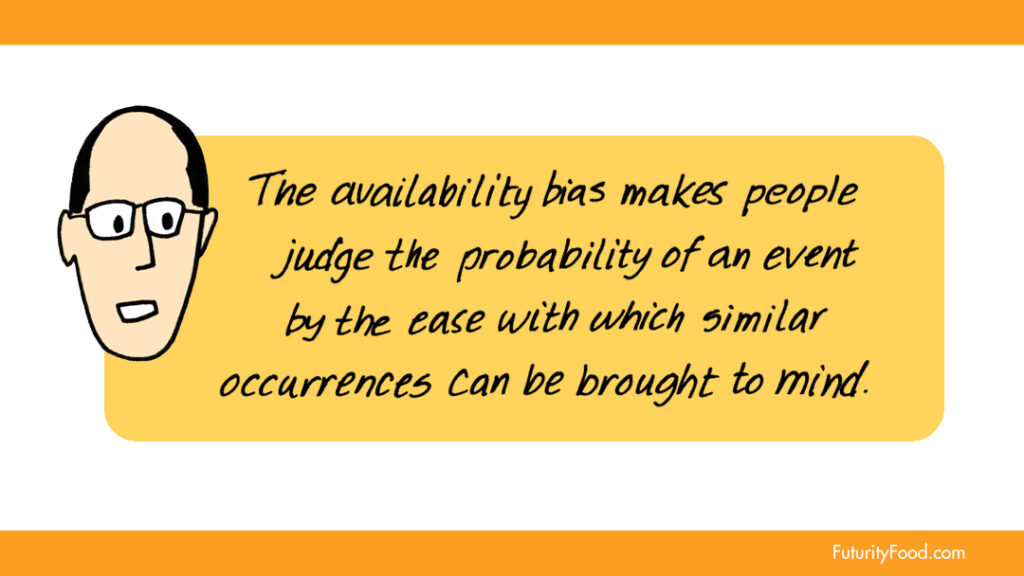 Amplified Risks Appear Larger Than They Really Are

Availability bias isn’t necessarily bad brain wiring. We are built to remember shocking stories more easily than dull ones so that we will be more sensitive to the possibility of future dangers. The issue arises in modern life when availability bias skews people’s ability to judge probability or frequency.

In order to understand this, let’s look at a non-food related example. Ask yourself—is an American more likely to be killed by a gun-related homicide, or radon gas? Most people probably are not even sure what radon gas is, much less that it causes fatalities. It turns out there are more than 30 percent more deaths in the U.S. each year from radon than from gun homicides (21,000 deaths as compared to 15,000). Gun-related deaths, however, get far more media coverage. Media amplification feeds the availability bias, often misleading our perception of risk.

Consider the danger of sharks versus mosquitoes. Which one do you think is the bigger killer? This time the number of deaths from the two is not even close. Mosquitoes kill hundreds of thousands more people than sharks every year.

We Fear What We Do Not Need To Fear

What this adds up to is that we worry about the things people tell us to worry about. How could it be any different? Media networks turn news of scandals into clickbait to increase attention, which is further amplified by our own minds. The result is that we begin to perceive risks where they do not really exist. 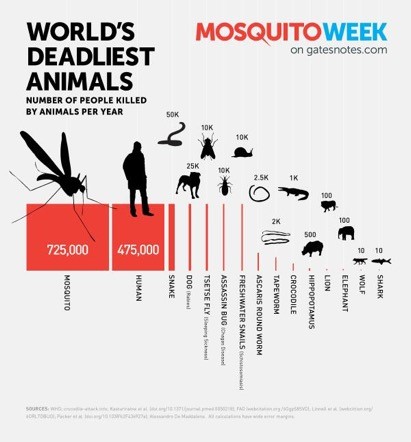 Words like “chemical” have become synonymous with toxins. We grow fearful of chemicals and preservatives and food colorings and demand that companies remove them even when—as is the case with preservatives—they are there to make our food safer. We enjoy our food today in a fresh an appealing state even when it has traveled thousands of miles to reach us. 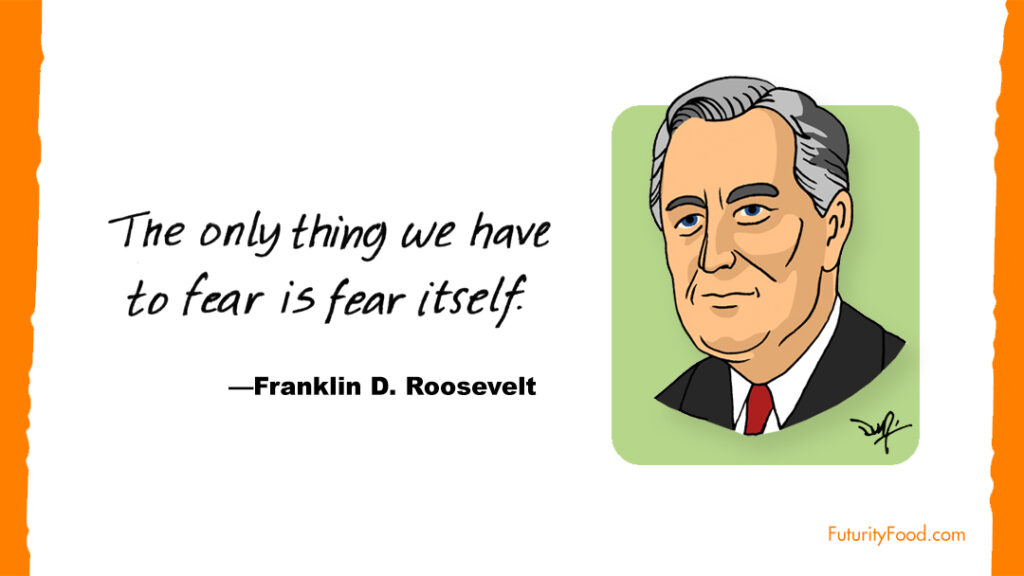 Considering The Facts Can Bring Back Our Confidence

So when you are confronted by the latest news scare, try to remember Hans Rosling’s message and “follow the data.” Spending a little mental processor time to assess the actual risk to you may produce a very pleasant and comforting revised perspective in the face of an alarmist report. Yes, there are chemicals in the environment, and in our food, and in rare cases some of it is even hazardous. And yet, despite all that we hear about such dangers, the larger and more important fact is that people continue to live longer and healthier lives. The rate of cancer deaths continues its long, steady decline. People continue to have fewer children, and farmers continue to grow crops with a smaller environmental footprint. The world is not so scary as some sources may be telling you, and that definitely applies to the world of food. We have the safest, most nutritious food supply in the history of the planet. Don’t fear it. Enjoy it! 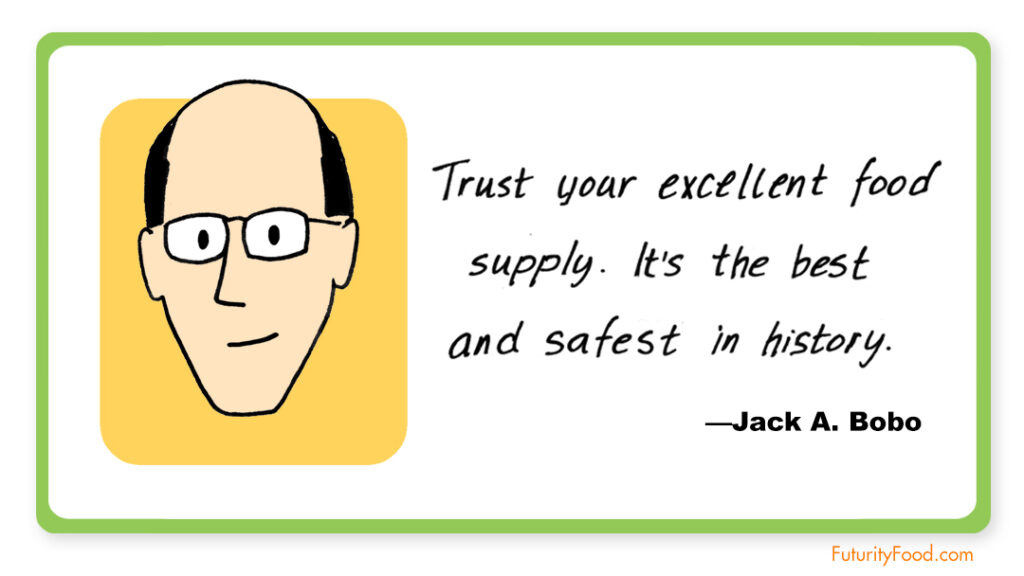